What kinds of methods can we observe in design practice when we focus on the interplay between the “world of things” and the “social world”? What patterns can we make out in approaches to the design process? At what point are decisions made, and what are they influenced by? The aim of the investigation into the eight sample projects in the ZHdK Design Department is to identify factors that make a difference to the design process. Is this process different in every design project or are there elements that are repeated in a certain way? Is each design project realised in its own, unique way, or does it display methodological similarities to other design projects? Does, for example, the cutting board, or the Bluetooth mouse, play a particularly important role in the planning process?

For our investigation into the “intrinsic logic of design,” eight typical design-based research projects were chosen, which provide answers to the above questions. The method chosen for the study is based on actor-network theory and “follows the actors,” actants, and networks through the development stages of the selected design projects. This involves the research team going into the “laboratory” and visiting the designers at their workplaces, where the projects are developed. In the course of non-structured interviews (using the “follow the interviewee” method), the project leaders describe the development of their research projects. These interviews are filmed and recorded. The open interview method used is based on “grounded theory.”

These interviews are then transcribed and printed, and the next stage of the process builds on this raw material: the transcribed interviews are coded on the basis of various criteria relating to networks and research processes. Some of the codes refer to actors, actants, places, and times, in line with the methodological foundations of actor-network theory. Other codes are oriented towards a more general analytic approach and accord with the vocabulary often used to describe the design process: situation, problem, rough, test/evaluation. Combining the various codes makes it possible to relate the various factors that have been found to make a difference to the design process, and to situate them with respect to it. The coded texts are converted into a digital format using the qualitative data analysis program Atlas.ti. In the next step, this digital data is presented using specially developed software which allows the coded textual elements to be brought into relation with one another and displayed in the form of a network.

The figures on the following pages provide an overview of the three tools employed in the study: 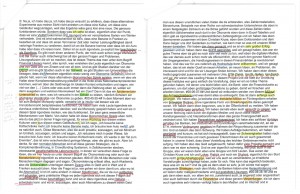 Tool #0, named “source,” comprises a script (the uncoded interview transcriptions), a device for replaying the interview films, and a numeric keypad for navigating the passages of the script. Using the time codes in the transcript, particular passages in the relevant conversations can be selected and then located in the video recording. 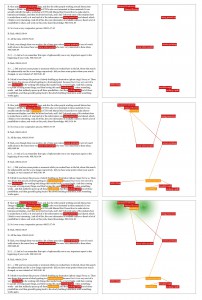 Tool #1 (“code”) is composed of two screens. The first screen shows the coded interview text. Tapping on a word causes the code attached to it to be highlighted in colour. The second screen displays the rhizomatic referential structure. Touching an element on screen 2 causes the relevant passage to be brought up on screen 1, and vice versa. Graphically represented, interactive networks are thus generated on the second screen, which provide a visual translation of the coded text passages and relate the codes attached to these passages to one another. 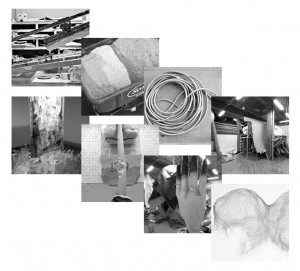 The third observational tool (“serial”) makes use of an online image search facility (such as that offered by Google). A term selected from the text displayed on screen is automatically put into an online image search. The first ten results are immediately displayed. On the one hand, this brings up the image world which the designers inhabit during the design process. On the other, it highlights how, in the course of the design process, some designers turn their attention to the image worlds generated by online search engines.