While current-day design has rediscovered a decidedly artistic approach to furniture, contemporary art has seen a trend toward installations that examine and question the role of furniture. This workshop has investigated differences and similarities in the way artists and designers work. On the basis of given materials and furniture, various situations were created within historic spaces, focusing on what it means to deal with limitations on one hand and an open process on the other. For instance, participants looked at what goals are defined, what creative strategies were developed, how existing material could be interpreted, how a project could be pursued cooperatively and individually, and what relationship exists between the author and the work.

23 Participants from Asia, Europe and the Americas developed, produced and discussed furniture-based settings for  a presentation at an empty farmhouse space at the Domaine de Boisbuchet. 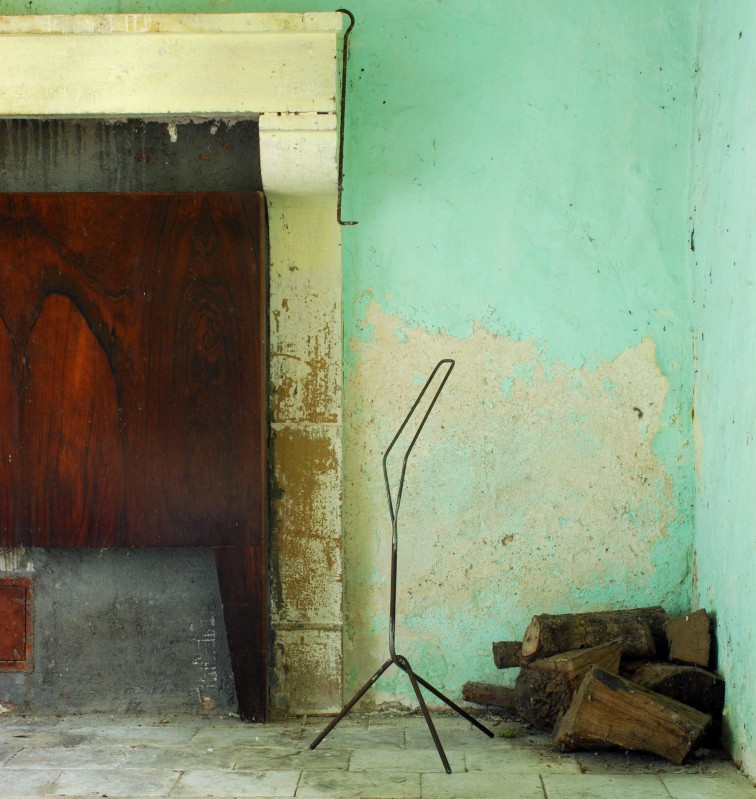 Object of Stephane Barbier Bouvet produced at the workshop

Born 1970 in Reykjavik, Iceland. Graduated as an industrial designer from Istituto Europeo di Design in Milan, Italy, in 1994 and received Compasso D’Oro for her graduation project. Started her design company H&H in Iceland in 1995. Projects for various different companies worldwide, from furniture to interior design to medical appliances. Returned to Milan in 2000 to do her masters degree at Domus Academy and continued working for H&H. Since 2001, she has been working for Ikea in Sweden, where she now lives. Designs products in all areas, from childrens furniture to bread baskets. Has worked on projects with all the biggest design schools in the world; Eindhoven Design Academy, Royal College of Art in London, Domus in Milan, University of Art and Design in Helsinki, Parsons in New York, University of Shanghai, Marhi in Moscow and many, many others. Her works have been shown at various design museums and shows like the VIA gallery in Paris, and items made can be found in the 2004 Design Yearbook. Sigga Heimis has recently been appointed design manager at Fritz Hansen, Denmark.

In a conscious attempt to avoid adding objects to an already overflowing world, the Berlin-based conceptual artist Florian Slotawa (b. 1972) utilizes everyday items and existing objects and spaces to create temporary sculptural assemblages and installations that invite discussions about the contexts and implications of institutional display, the boundaries between private and public space and notions of artistic preciousness. Dismissing their traditional functions, he liberates objects from a closed system of interpretation, thereby revealing their latent artistic potential, a strategy he has also extended to the exhibition space. His work has been shown in numerous solo exhibits, such as at the P.S.1, MOMA in NYC, Sies & Höke Galerie in Düsseldorf and Modern Art in London.

The symposium aims to explore current trends in the relation between furniture in art and design. In both disciplines furniture is often presented in installations, making it part of the the art or design “work”. In the area of design, a potential viewer becomes even more important than the user. The appearance of furniture reveals more about its production history or visual associations than about the object’s practical use. Although artists like Jorge Pardo produced functional furniture in the 1990s, a younger generation of artists, like Martin Boyce, seem to be exploring visual options of possible uses rather than making actual furniture. This seems not to affect the notion that an artwork is predominantly a visual phenomenon. Lectures and discussions will revolve around the mutual influences between the concept of a work of art and that of a work of design in contemporary culture, taking into account their philosophical and sociological consequences. Please download all abstracts of the lectures here (PDF). 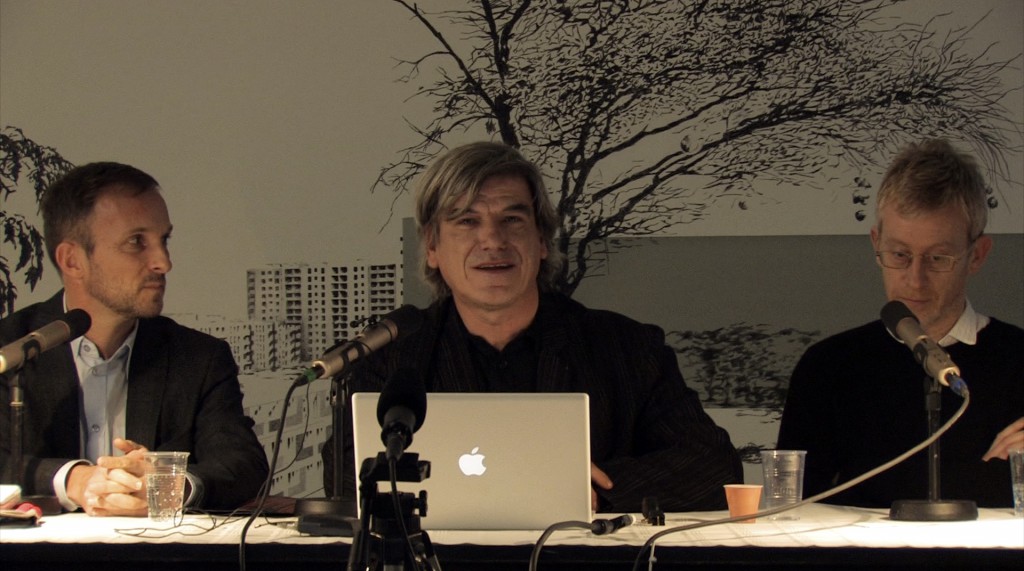 5:00 PM Alexander Garcia Düttmann, London (in German) Participating in art: Semblance and Consciousness Participating in art means being aware of the fact  that one is dealing with artworks, with something that is man-made.  But at the same time a certain  semblance is required for such participation to take place. The artwork must appear as if it were more than a mere product of human activity. How can one relate to the semblance of art and yet remember that art is produced by man? Perhaps design is an attempt to create a functional artistic object, or to create a semblance that makes the object appear different from a purely functional object. Is the semblance in design then the same as in art?

10:30 AM – Welcome by Heike Munder, migros museum for contemporary art.

Changing intellects or designing toasters? Creative disciplines are undergoing the most significant paradigm shift in living memory as professions migrate from conventional design tasks towards immaterial commodities and concepts.

Seats and other possibilities in art and design (in German) Two movements of the 90s – “Esthétique Relationnelle” and “Cross-Overs” – brought design and art closer together than they had been in decades. Allen looks at various examples – like Carsten Höller’s “Double Club”, Atelier van Lieshout’s “Parasites” or Bojan Sarcevic’s “Baumeister-Collages” – and examines the effect those movements had on the concept of the art work in that period.

Design and social control – furniture in socio-spatial constellations (in German) Frers examines the role of furniture design in human perception and interactions with the environment as seen from a sociological perspective.

The work of design and the living environment of art (in German) The research project “Prototype – furniture in art and design” explores contemporary positions in art and design. During an extensive research trip, Meltzer and von Oppeln questioned authors from both disciplines about their concepts and methods. The results show how the notion of a “work” has emerged in the field of design, and how the notion of an “artwork” has been changed by design influences.

Is the notion of an artwork new experimental ground for design?

Prof. Dr. Alexander García Düttmann is professor for philosophy at Goldsmith College in London. He is working on a research project dealing with concepts of participation in the arts.

Prof. Dr. Ronald Jones is both an artist and a critic for art and design. He is professor for interdisciplinary studies at Konstfack University College of Arts, Crafts and Design in Stockholm, Sweden. Jones frequently writes for Frieze, Artforum, Parkett and ID magazine

Dr. Jennifer Allen is an art-critic based in Berlin. Her texts are published in numerous magazines, including Parkett, Domus, Artforum, Afterall, and Les temps modernes. She recently obtained the ADKV-ART COLOGNE Prize for art criticism.

Heike Munder is a curator and director of the migros museum of contemporary art since 2001.

Tatiana Trouvé is an artist who often uses furniture and architectural elements in her work. Trouvés solo show will open at November 20th, 2009 at the migros museum for contemporary art. She received the Prix Marcel Duchamp in 2007. The Centre Pompidou honoured her work with exhibition in 2008.

Max Borka has worked as a journalist for politics and culture for more than two decades. His positions include director of the Interieur Foundation in Kortrijk, organiser of the Interieur Biennale and artistic director of designbrussels. Today he has established himself as a writer and curator in the fields of art, architecture and design.

Martin Boyce is an artist whose works often refer to modern design and architecture. A recent presentation of is work is on show at the Scottish Pavillon of the Venice Biennal until November 2009. He lives and works in Glasgow.

Prof. Frédéric Dedelley is a designer based in Zurich, where he has run a design studio since 1995. He was professor of furniture design at the university of art and design in Basel from 2001 to 2008. Credit: The title „It´s Not a Garden Table“ is borrowed from an artwork by Xabier Salaberria, San Sebastian, Spain.