Disability, ableism and the body in art schools

The assumption that everybody is physically and mentally fit, efficient and productive is so much at the heart of higher education that ableism is often times not considered when it comes to diversity. In preparing for its fifth and final colloquium, the Art.School.Differences team realized how central disability as a category of analysis is in understanding processes of inclusion and exclusion in the field of higher education.

Disability studies have deconstructed the assumed difference between able and disabled bodies by pointing out that we are all only temporarily abled-bodied: Sooner or later every-body will face physical or mental restrictions and depend on helping hands and devices. Nevertheless, ableism is easily overlooked in our outcome- and efficiency-oriented teaching and research practices. And, ableism is much more than the discrimination or social prejudice against people with visible or invisible impairments. It is based on the notion of an ideal bodily standard and the fundamental distinction from everything that deviates from this standard. In higher art education in particular, the assumption looms large that passion and dedication imply working 24/7 and being ready and able to ignore such basic needs as eating or sleeping. If the aim is to create an art school free of discrimination, we need to ask how the body is represented in and by art schools, and what ableism means for teaching, for learning and for our understanding of art and aesthetics in general.

Only very recently disability has been made part of diversity policies in art institutions. But as Sophie Vögele noted in her welcome address, while the diversity of institutions is measured by counting nationalities of students and addressed by organizing multicultural dinners, there are no serious measures taken so far to tackle ableism. This would imply that “institutions provide access to disabled students and teachers in order to allow them to pursue their studies and work, but it is also important to acknowledge disability as a potential for new or non-mainstream artistic expression.“ A famous example for such new forms of expression is the British dance film by DV8 Physical Theatre and its principal character David Tool, a dancer without legs. https://www.youtube.com/watchv=QgUT0Ufmkbk&feature=youtu.be

In his introductory comments Xavier Bouvier, Head of Studies and Head of the Composition & Theory Department of the Haute Ecole de Musique de Genève, addressed the challenge of creating more “equal, fair and non-normative“ art school curricula. In particular he focused on some of the keywords in the latestet version of the Bologna Declaration of Europe’s Ministry of Education. Among other the Bolgona reform, which has initiated fundamental changes  in order to create the “European Higher Education Area,“ aims at developing “competence based“ curricula. The term “competence“ refers to the applicability of knowledge, hence the student’s capacity to apply the knowledge acquired and be fit for the labour market. In this context of applicability and employ-ability, competence profiles are in danger of perpetuating a form of ableism which dis-ables certain students. Unless designers of competence profiles validate the (often creative) ways in which students with disabilities acquire and apply knowledge and consider their alternative skills and strategies as an asset, the logic of competence will not enhance the presence of such students with special needs.

In the art school context the question of who will be employable and which competences will matter most in the future is tricky, given that the market for performing artists has undergone and will continue to undergo enormous changes in the decades to come. Success measured within the normative model of being able to answer to a prior fixed market demand, may be less important than the ability to build new demands. Another point Bouvier singled out is Bologna’s ambitious goal to foster “intercultural understanding“ in order to “strengthen European and global citizenship and lay the foundations for inclusive societies.“ Especially in the context of “conservatoires“ that seek to conserve and transmit certain musical traditions, it is hard work to build up artistic understanding across cultures. Taking into account that music cultures are steeped in traditions that “frequently behave in normative ways much remains to be done.“

Sébastien Kessler the main speaker of the evening, describes himself as an activist. Kessler has an engineering degree in physics at the EPFL of Lausanne and a Master in Health Economics. Asked to represent the point of view of a person with a “handicap,” he got increasingly involved in adult education. Kessler co-founded a consultancy that specializes in universal access and has worked with Swiss hospitals, airports and universities.

Kessler took his personal experiences as starting point to his presentation. As July 3rd was one of those dog days of summer, he started his presentation by addressing the way in which the heat affects wheel chair users. He did so by polemically instructing us, the non-wheel-chair-using audience, to add something to our curricula: “Stick your feet to the floor, the back to chair and don’t move for an hour. If you don’t manage you’ll get a bad mark.“ The lesson: We tend to be unaware that heat and sweat makes it harder to sit for long hours without getting soar; the ability to sit amounts to an unspoken (ableist) requirement of higher education.

Aimed at informing and educating, Kessler’s presentation highlighted a range of disabling practices, as well enabling strategies and self-representations of „handicapped“ people. A North American „disability sensitive training“ video he showed (see the link in the last slide of PPT Sébastien Kessler) was particularly impressive, if only because, both white people and people of colour spoke about their disabilities. By explaining how they liked to be interacted with, they account for the fact that it is not easy “to interact with people you are not accustomed to,” as Kessler put it. What goes unsaid of course, is that they are thereby taking on the burden of educating their fellow “non-disabled” people.

A critical aspect that came up when Kessler mentioned Switzerland’s recent vote in favour of embryo testing, was the question of happiness. While some disability organizations supported the new law, others questioned its eugenic premises and the implied link between dis/ability and un/happiness. Kessler suggested that economic privilege – which, as I would add, tends to be accompanied by racial privilege – plays a major role in whether or not an impaired person can live a comfortable, and supposedly happier life. Without further exploring the question of suffering and happiness, Kessler pointed out that a monthly allowance of 1500 CHF, the minimum Swiss disability pension, makes life challenging. He further indicated that his own mobility and visibility as an activist owes much to the fact that his parents had the means to send him to good schools. His social and cultural capital as a white male Swiss citizen helped in finding an internship and enter a job through the backdoor, in making strategic choices about his studies (public health) and becoming an entrepreneur in a sector (the private field of disability) in which, as he says, his visible impairment is an asset rather than a disability.

“Le freak, c’est chick!” the title picture to Kessler’s presentation is a still from the American horror film “Freaks” by Tod Browning. 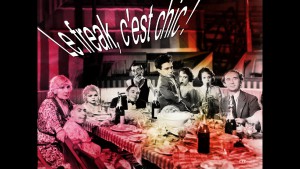 Produced in 1932, its actors and actresses usually performed in carnival sideshow where they were to show case their physical „deformities.“ According to Wikipedia, the original version of „Freaks“ was considered to be too shocking and was destroyed. Today, people with disabilities figure in dogma films such as Lars von Trier’s “Breaking the waves “ or “Danger in the Dark” (see picture below). It would have to be examined not only how exactly they are portrayed, but also how they are positioned in terms of their racial, gender, and class affiliation. 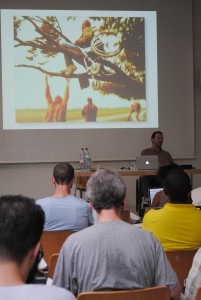 „Disabled people are never represented as normal. They are either super intelligent or they are incorporated as the villain, they are represented as either inefficient or as highly talented.“[1] The later notion of being extraordinary, intersects with attempts to produce positive images, by portraying what, say, sportsmen in wheel chairs are capable of. Showing a video ad on disabled sports, Kessler mentions that he himself, regardless of his non-sportive looks, has been asked whether he plays Basketball. Ironically, as I would add, able-bodied young Black men get asked the same question; the connecting logic perhaps being: there are certain “other“ fields, such as sports or music, in which even non-normative bodies are credited for their successful performance.

Kessler himself did not focus on the ways in which different minoritized groups are interpellated by the same norms, or excluded in different or similar ways. Neither did he engage with the ways in which different marginalized groups are being played against each other, politically and in cultural representations. Rather, concerned with determining the needs of and providing universal access to people with a variety of physical and mental impairments, his key message was: “you are not disabled everyday, you are in a disabling position depending in your environment and what concepts you meet.“ This important message also transpires in his carefully put together powerpoint presentation PPT Sébastien Kessler.

[1] However, Kessler also reminded us of the adds that depicted happy children affected by trisomy 21 (Down syndrome) in the late 1980s, in which people with disabilities are portrayed as, at least potentially, “normal” consumers.

$larr; Invite to colloquium 5: Disability, ableism and the body: Diversifying, the politics of representation and queering art school
Summaries of Co-Research Projects →