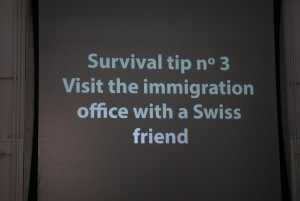 How to survive in the Swiss art school jungle
The project of Daniel Zea, Hyunji Lee and Andrea Nucamendi is concerned with the inequalities faced by non-European students at Swiss art schools. The research group that understands itself as a collective has identified several administrative and everyday challenges structuring the marginalization of non-European students at HEAD such as money and paperwork, language, artistic and conceptual references, or the lack of courses that transmit basic technical skills. While focusing on the students’ lived experiences, their survival strategies, and their everyday and artistic responses to discrimination, the collective is also asking how a more just treatment of non-European students could contribute to a more successful internationalisation of the art school. These questions will be addressed through the creation of a web-series in which non-European students and teachers speak about their experiences and (strategic) responses to discriminations (see https://vimeo.com/search?q=coKo+nuts for first videos). This video documentation seeks to (1) make visible and raise consciousness about mechanisms of exclusion, (2) to equip non-European students with tools to perceive of (and cope) with discrimination, and (3) to think about the ways in which art schools could enhance their process of internationalisation, notably by making reflection on structural inequalities an integral part of the curriculum.

Alterity put into center
Martine Anderfuhren, Patricio André, Claire Bonnet, Fabio Fernandes Da Cruz and Ivan Gulizia from HEAD’s department of visual communication seek to initiate a series of events that stresses the ways in which students differ from the school’s assumed norm. In a first step of preliminary inquiry, the research team has identified strategies which students deploy to tame and curtail their “alterity” over the course of their study. They developed a definition of “alterity” and found five dynamics – assimilation, concealment, confrontation, resistance, and autonomy – which were tested with the help of a self-administrated questionnaire. The team’s initial concern with the tools students and lecturers may seize in order to call attention to the art school’s internal “others” has increasingly given way to the question of how an informal networking and mentoring system could be developed, whereby different students god-mother_father each other. The first event they have planned for shall be announced by a “fire alarm” signalling the urgency of questioning institutional norms and its processes suppressing difference. It is the requisite initial event from which further unannounced events shall follow, sparking off exchange and conversations on the (existing) diversity within the student and teaching body. The aim is to make “alterity” a functioning principle that is conscious and present throughout institutional processes. In this way and along the events, the project shall grow and eventually spread to other departments of the school and be taken up by further student cohorts. 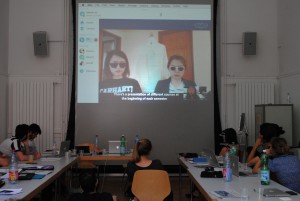 The socio-cultural & socio-economic backgrounds of non-European students
Patrik Dasen and Soojin Lee conduct an ethnographic study that investigates the socio-cultural and socio-economic backgrounds of non-European students at the HEM-Genève. They are particularly interested in their musical trajectories and their lived experiences in Geneva. The study is based on semi-structured narrative interviews that focus on a broad range of issues such as the students’ family backgrounds, their current financial situation in Geneva or their relationship to the school’s and the Swiss federal administration (regarding visa issues ect). A preliminary analysis of these in-depth conversations complicates generalized notions about the assumed comfortable, upper-class status and the privileged position of international music students. While evaluating their everyday needs and intense institutional struggles in Switzerland, the researchers also aim at valorising the socio-cultural potential non-European students represent for the school. Further, interested in student-teacher interaction, they are also interviewing teaching staff. The data generated allows for the sensitisation and the opening up of critical debates among and between students, teachers and administrative staff, concerning the processes of discrimination at the heart of the institution.

Solfège – a universal language?
Victor Cordero, Bernardo Di Marco and Micha Seidenberg suggest that solfège (ear training), as it is currently understood and taught at Swiss music academies needs to be profoundly rethought. Contrary to popular notions about the universality of music theory, the theoretical premises of solfège are far from being universal. Rather, there is a variety of underestimated non-western pedagogic traditions that theorize musical processes in ways that have not made it into higher education. Based on qualitative interviews with students, professors, and executives and on the analysis of statistics by HEM-Genève, the group explores the structural exclusions of (mostly) non-European music students who were not socialized into the inherently Euro-American solfège tradition – hence who have not been trained to read or rewrite a score after hearing music. While solfège plays a decisive role in the admission process at Swiss music academies, its testing demands competences acquired prior to entering higher education. By assessing (universal) cognitive competences according to a regional tradition, music academies are prone to overlook much artistic potential. Given that HEM-Genève wishes to attract and integrate “international” students, thus students, whose cognitive ear training may differ from the way in which solfège has been constructed by Euro-American art schools, the conflicts emerge that are the object of this study. 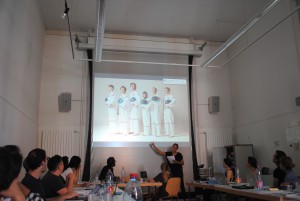 The notion of “good design” in higher design education
The project of Sarah Owens, Tingshan Cavelti and Allaina Venema interrogates the figure of the “good designer“ and the seemingly universal nature of “good design“ with its implicit claim to moral integrity. Starting from the BA course in Visual Communication at ZHdK, they ask how the “good designer“ is constructed within professional discourses and within the logic of tertiary education. A preliminary analysis of design journals and conversations with students shows that the most celebrated designers tend to be able-bodied, white men who represented as “design mavericks” or “design service providers”. In as much as these figures function as role models at German Swiss design schools, it needs to be asked how they shape and homogenize students’ professional identities, and to what extent their construction works to perpetuate the internationally recognized “Swiss style.”
The project thus aims at questioning and interrupting this seemingly natural, reproductive cycle. This will be done by examining curricula and teaching materials, and by instigating critical conversations among students and teachers over unspoken understandings of “good design” and related key terms such as “good taste,” “talent,“ or “creativity”. Finally, the norms constructed within admission procedures, presentation of final works, employment strategies, or criteria for course self-evaluation shall be discussed and, while always considering the school’s institutional framework, possibly modified.

Notions of one’s “own expression” in grammar school art education
Julia Kuster, Laura Ferrara, Lorenz Bachofner, and Nora Schiedt interrogate how grammar school art educators understand the phrase “own expression” (“eigener Ausdruck”) in art education, as well as related key terms such as individuality, autonomy, or authenticity. They are concerned with the in- and exclusions produced by these understandings. Based on their own experiences as former grammar pupils, as MA students of Art Education at ZhdK and as future grammar school art educators, the group sees itself positioned at an interface where aesthetic tastes, norms and values have been reproduced without thorough reflection.
Their preliminary analysis shows that finding one’s “own expression” amounts to more than a learning target. Inscribed in grammar school curricula, this phrase reflects ideas about artist originality that hail from the project of enlightenment. In practice, expression is equated with originality and contrasted with imitation, e.g. when teachers mention a pupil’s manga-style drawings as an example for lacking “own expression”. The group has been collecting, visualizing, and mapping thoughts, questions, pictures and teaching materials; this “mapping” serves as a guide for further interviews (at Kantonsschule Küsnacht) and is continually extended by the examples art educators contribute from their own teaching practice. Based on this mapping, the group envisions the production and dissemination of digital and analogue leaflets, are aimed at sensitizing art instructors at different institutions.

Inclusion und Exclusion through mentoring in artist education
Romy Rüegger and Yvonne Wilhelm are examining the mentoring format in the BA program in Art and Media and the MA in Fine Arts at ZHdK. Mentoring consists of a series of one-on-one conversations between teacher and student or, possibly, artist group: An experienced artist accompanies a prospective artist (group) in developing their practice and recommends references, work methods, decision-making tools ect. Inevitably, these conversations are shaped by differences in artistic socialization and professionalization that foster mutual preferences, discriminations, in- and exclusions. Given that mentoring has been a tool to sustain cultural differences, to perpetuate the existing canon and to reproduce exclusive and excluding relationships within the field of art, the project addresses the (potential) “bonds” and the power relations at the heart of the intimate mentoring situation.
Due to different personal and institutional positions, Romy Rüegger (as an assistant and BA tutor) and Yvonne Wilhelm (as a lecturer in the MA program) follow slightly different approaches. From the outset, they have been documenting their mentoring experiences and research strategies on a semi-public blog. Their sporadic exchange with mentored, co-researching students will be continued and the research results of mentors and students shared on a second, semi-public blog. Further, in spring 2016 a workshop on the mentoring format will be developed and offered; as an artistic outcome, performative presentations on artistic research are being contemplated.

All of you: Thanks for your amazing work!