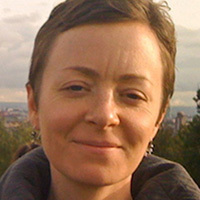 Bella Honess Roe (UK) is a lecturer in film studies at the Department of Dance, Film and Theater at the University of Surrey. She wrote her dissertation on animated documentary films at the University of Southern California, Los Angeles in 2009. Bella Honess Roe has years of practice in film production companies in Los Angeles and London and has led workshops as a script consultant. Recently, she also works for the DocHouse in London.