We have the chance to give a maximum five-minute insight into our research film „Sechs RegisseurInnen – Eine Republik“ with a focus on HORA-director Frankie Thomas. This will take place as part of the Research Slam of the Tag der Forschung at the Zurich University of the Arts. 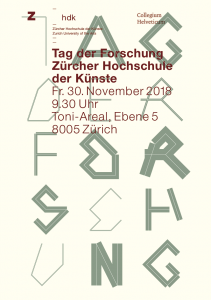 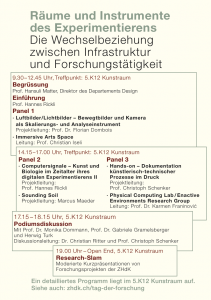 Publication of our Paper in the Finnish journal Synnyt/Origins

We are very happy to announce that our paper DisAbility on Stage – Exploring the Physical in Dance and Performer Training has been published in the journal Synnyt/Origins: Finnish Studies in Art Education, September Special Issue.

It is now publicly available!

ELIA – European League of Institutes of the Arts is a globally connected European network that provides a dynamic platform for professional exchange and development in higher arts education. With over 250 members in 47 countries, it represents some 300.000 students in all art disciplines.

The 15th ELIA Biennial Conference is hosted by Codarts University of the Arts and Willem de Kooning Academy/Rotterdam University of Applied Sciences in Rotterdam – a young, dynamic and innovative city. The discussions will focus on the role of the arts in creating resilient cities in times of global change.

Our research project will also be part of this great conference! Demis Quadri, Sara Bocchini and Sarah Marinucci will present the subproject „Disabled Bodies in Discourse“ and the long time performance project „Freie Republik HORA“. 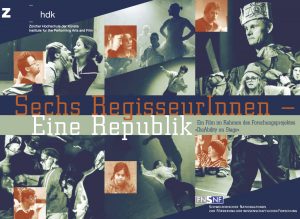 The Swiss Graduate Network of Use-inspired Research in Design, Film and Art has organized its inaugural conference for Thursday, September 27 and Friday, September 28, 2018 at Lucerne School of Art & Design, Lucerne University of Applied Sciences and Arts, Switzerland.

Founded in 2017, SwissGradNet is a network of four Swiss universities of applied sciences and its foreign university partners who follow the objective to foster use-inspired PhD projects in the fields of design, film and art. For its inaugural conference, the core question to be discussed shall be what position the fields of design, film and art can adopt towards the concept of use-inspired (basic) research. Taking a stand on the proposed definition, researchers, PhD candidates and higher education professionals will present best practice projects and elaborate on institutional frameworks as well as strategic matters in the context of use-inspired research.

On Friday, September 28, 2018, at 10:45 AM, in the context of the conference, Demis Quadri, SUPSI Professor of Research and Teaching in Physical Theater, will present the contribution „DisAbility on Stage / Disabled Bodies in Discourse. A project between art, education and research“.

Abstract: Funded by the Swiss National Science Foundation, the interdisciplinary research project “DisAbility on Stage” (directed by Yvonne Schmidt) is the first comprehensive examination of theatre and dance practices by and with artists with disabilities. Carried in a cooperation between the Institute for the Performing Arts and Film (IPF) at Zurich University of the Arts, the Accademia Teatro Dimitri SUPSI in Verscio, the Universities of Basel and Berne, and several Swiss theatre and dance companies, the project has the aim to encourage the discourse of disability at art schools and universities and to transfer the resulting findings into practice. The focus is put on three studies, which investigate performer training, reception and rehearsal process. This speech will offer an overview on the sub-project “Disabled Bodies in Discourse”, an investigation, led by the Accademia Teatro Dimitri, of the connections between physical theatre and theatre made by actors with disabilities. Points of enquiry in the linking of these fields are actors’ training and the development of original dramaturgy by performers. The sub-project also included, between 2016 and 2017, a Stage Lab that allowed some Master students and a group of actors with disabilities to become participants in a theatre workshop that reflected on a combination of practical and theoretical research.

“Theatre and Migration. Theatre, Nation and Identity: Between Migration and Stasis”

We are happy to announce that the Working Group will present, among other very interesting papers and thoughts, our research film Sechs RegisseurInnen – Eine Republik within this year’s IFTR.