Pupils Listen Carefully
After shortly introducing ourselves, we asked the pupils to stand together in a circle in the front part of the classroom. We told them to be really quiet and listen carefully to the sounds. We had collected the sounds in the preparation week the week before. We had not expected such excitement from the pupils. They could not stand still! They wanted to tell us immediately what was in their mind, as soon as the first sound was played. Our plan was to play four sounds, one after the other, and discuss them at the end. We had to change that part of the lesson. For the talkative pupils it was important that they could express their imaged images and stories straight after listening to each sound. Such reactions showed me that I do not have much experience with children in the age between seven and eleven. 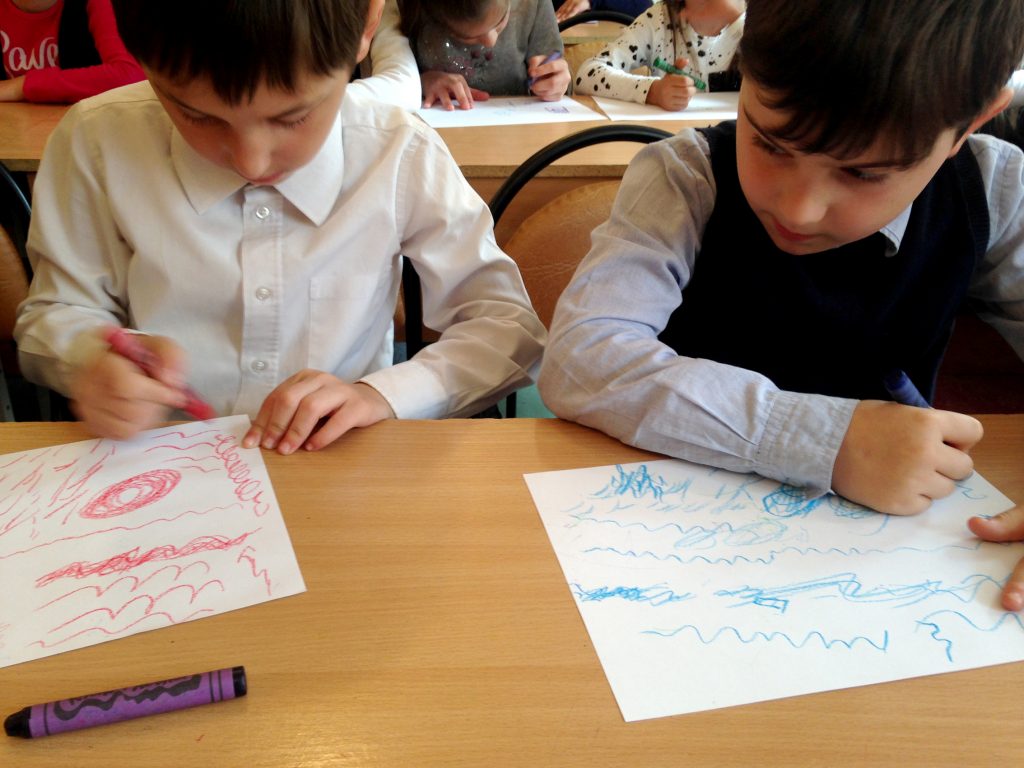 Sounds Transformed into a Drawn Expression
One of our goals was to make the pupils aware of all their senses, not just their sight. Linked to that purpose was the ambitious aim, that they would express the sound, or the feeling initiated by the sound, in a drawing. This is a really abstract way of drawing. We gave them an introduction to the exercise, first only verbally. We did not want to draw an example, because we wanted to avoid that they would just copy us.  The task to draw the abstract sounds with crayon was not easy for them. Many pupils were blocked, or not sure about what we asked them to do. So they where looking around, checking their neighbors paper.
Leaving them hanging without more instruction, and giving them no rules, and no right or wrong, was very challenging for them. For us it was also hard to bear this situation, and not be tempted to give them more input. To avoid this unpleasant situation of not knowing if any child would start drawing, we prepared an exercise, were we asked them to draw sound as a one ongoing line without taking the crayon away from the paper. In the end we gave them an example on the blackboard, and showed them how to give rhythm to a line. 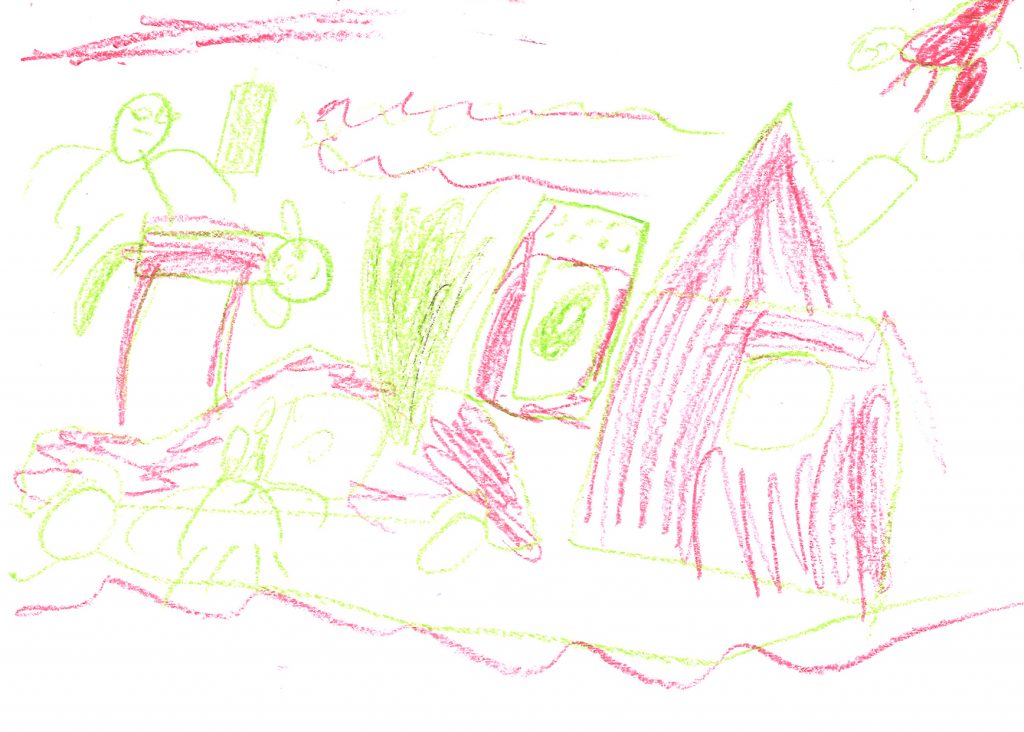 Sound Story
One exercise was listening and drawing after hearing a longer sound, which told a story only in sound, without words. First the pupils just listened carefully to the sound. Then they listened again and drew simultaneously what they had heard. This really stimulated the pupils phantasy. Everyone made up their own story and drew it in their own style. Some of them stayed in the non-object-based way of drawing. They drew sounds all over the paper, in one composition. Other’s drawings were abstract, they drew more like notation as lines. Some of them got more objective and drew images of what they had heard, and others combined an abstract visualisation of sound with an object in one image. It was nice to see and talk about all the different ways of translating sound into a drawing. I think it was educational and the pupils could draw a lot from it. 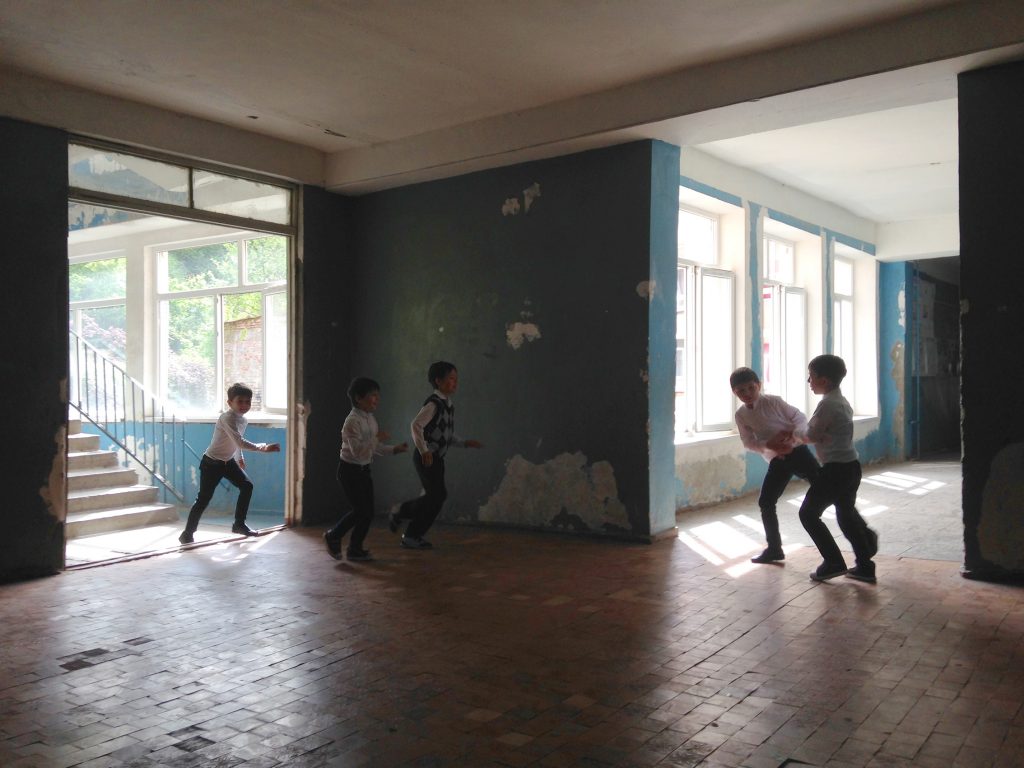 Pupils in the Corridors
Soon after the school bell rang, children were running through the corridors of the huge school Nr. 6. The younger ones have such an energy, which has to get out of them in the breaks, because the lessons are strict and disciplined. For me, the noise in the corridors was quite hard to bear. I am not used to so many young children at the same time, but I loved watching them running around. The energy and the pleasure that I saw was inspiring. How could this be taken into the classroom as well? I can imagine an art class as an environment, where there is the possibility to bring physical acts into a lesson – maybe as performative parts. That idea just came in my mind at the time we  already were practicing our prepared lessons. I will keep it in mind for the next time. 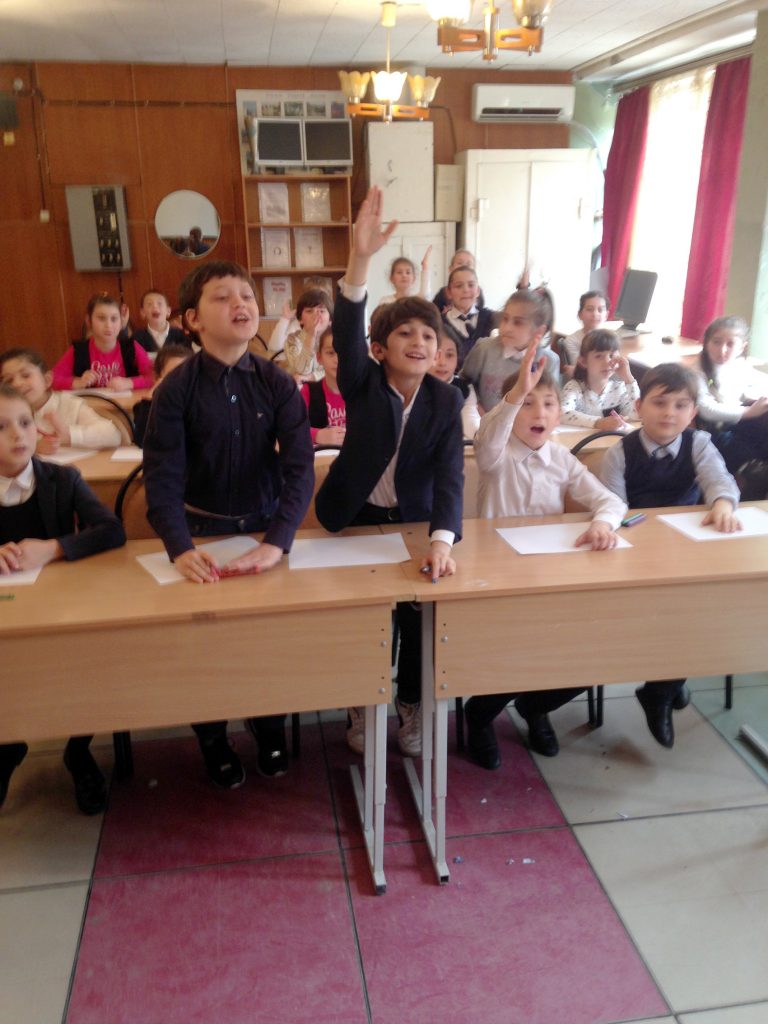 All in All
It was so educational for me to teach one class after the other. Although we refined our lesson over and over, some classes just reacted differently. The older they were, the more abstract they drew. Some of the pupils said, they cannot draw an object in a nice way, so they stayed non-objective. That would support the theory we learned from our Professor Dieter Mauerer in Switzerland: Teenagers would really want to draw realisticly, and if they are not able to do so, they would rather not draw at all. I think the younger pupils draw more freely.  Anyhow, standing in front of the class, lesson after lesson, gave me a lot of confidence in teaching.