Reflections on being, studying and working in Suchum/i.

We arrived late in Suchum/i…. the sun, a red light ball above the horizon was setting slowly down, while we were sitting in the bus reaching Suchum/i by night. I remember being tired, but full of excitement. Where will it lead us to? Whom are we going to meet? What are we going to create together?

The next day at the University we were formally introduced, and finally met our students of exchange. 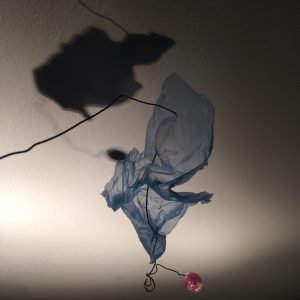 Our working group, we called it MOBILE, was very eager to create objects that where interesting to look at, or that gave an idea of a figure, or an association of cosmos and sky. The shadow became interesting, because it made our objects more dimensional. When the MOBILE was moving, the shadows of it, projected through the light were silently making a moving, light and two dimensional composition on the wall . It then revealed more of what we wanted to create: an appealing atmosphere in the room, that opened up associations, with little elements that could be looked at for a long time.

The open Sky at the seaside, as well as the found objects along the beach, were an inspiration to us. 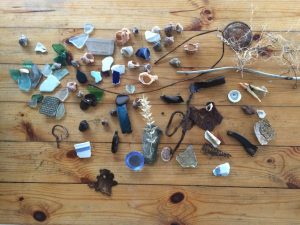 Without knowing which classes we are going to teach, we were talking a lot about how we could frame the topic so that we can be well prepared for many settings, and circumstances in school. Through reflecting we discovered the parallel of the story of Abkhazian Story Tachkum and the middle European fairy tale “the brave tailor” (Das tapfere Schneiderlein).

In both stories appears a traveller that meats a giant somewhere on his path. And to be able to pass, both Tachkum and the brave tailor have to proof their strength. They both trick the giant with a reddish cheese that they pull out from their pockets and squeeze it so hard that apparently liquid drops out of it. The Giant and the birds and flies are similar elements in both stories. 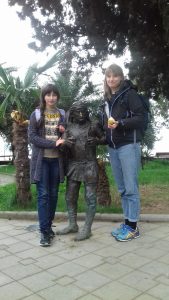 So from there we decided to slowly transform the classroom setting lesson by lesson, into a magical space with a lot of atmosphere, using the elements of the stories that where so similar in both  tales.

What was left from our ideas, and how we adapted ourselves to the surrounding.

Immediately when we entered the classroom, we had to teach a first lesson. So we were very much improvising, without any changes in advance. Nora was already writing about the birds, and the whistling sounds, which were very beautiful.

After the first reflection with our Art teacher and his class we adapted our program for the next day. We were told, that in April, the whole school has the cosmos, as an overall topic. We could watch a class the Teacher held. He draw the composition on the blackboard, and the children draw it similarly, with a personal note. So we decided together with the teacher, that the next day we bring in an input from our side, tackling the topic of the cosmos, but from a different angle with a different method. It was interesting that suddenly our MOBILE made very much sense. So we retook our first ideas and we arranged the room into an atmosphere that was different. 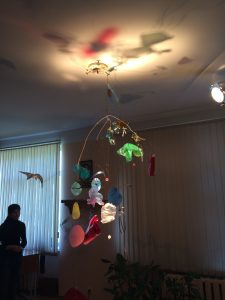 We wanted to create some wow effects for the children when they enter the room, that they immediately find themselves in a different “world”. The children should then, this was the plan, get inspired and come to their own interpretation of the cosmos and to their own compositions. And for that we changed seats and tables from their orientation to the front. We made a half circle, with space in the middle to come together and talk closer on eye to eye level. 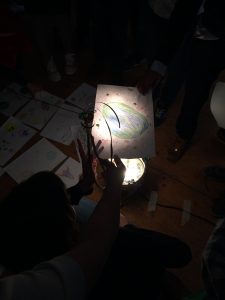 These classes, I do remember as harmonious. It seemed to me, that I saw many sparks of enthusiasm in the children’s eyes. And that we experienced some moments of wonder. The drawings of the children became very diverse and creative.

During these day and after a second reflection with the artteacher our lessons became much clearer and clearer. We integrated ideas from the artteacher and integrated elements of technical transfer. All in all, it was a rich, improvised, exchange and learning process in arts teaching, communication, intercultural dialogue and team work. 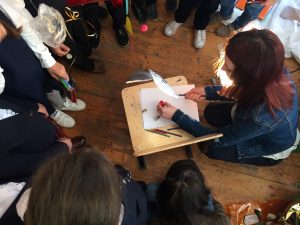