Draw out of intuition

In short concession, sounds collected from around Sukhum/i were played to the class. This exercise was aimed at shaking the student’s idea of drawing perfectly, or just drawing objects. Instead, it should encourage them to draw out of intuition, and to think about how the sound was made – the movement that made the sound. on the drawing depicted here, the pupil translated four different sounds in four different ways. This kind of outcome was very encouraging for us, because it meant the pupil had understood our instruction and had experimented. 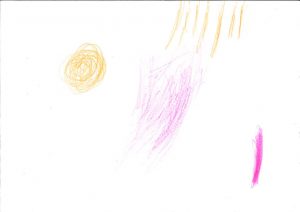 draw out of intuition