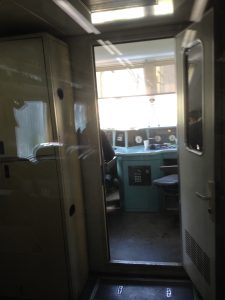 Most participants, including myself, appear one hour early for breakfast. – There was some annoyance in the air since yesterday – some students disagreed with the plan that we, the lecturers, tried to propose to them during our train journey from Tbilisi yesterday. To them, it seemed too strict,  too abrupt, we were told. It was also criticized that a plan, as soon as it had arrived in our heads, would be hard to drop. In addition, and most importantly, the students thought, that an initial idea would leave the partners no space for their own proposals. They would be overrun, and that would be exactly the “colonial attitude” we normally would criticise. Some students expressed themselves less explicitly. Apparently we had been unable to convincingly communicate our concern.

In retrospect, however, it is clear to me that both sides were right, given their own horizon of experience. We lecturers had already collaborated with unknown partners many times, and always had found it beneficial to have an idea that could develop in the encounter. The students, on the other hand, were careful, and this was reasonable and cautious.