After playing a variety of short sounds, that we had recorded from the urban environment of Sukhum/i, the students were asked to take out a new blank piece of paper, and this time they were instructed to listen to a longer sequence. This longer sequence had a narrative structure: There were two characters, firstly a woman walking down some stairs outside, with birds chirping in the background, the opening of a door, turning on a washing machine and feeding her cat. The second character, the cat, can be heard in the background, as she enters the laundry room and then again meowing in thanks, when she receives her food. The students were asked to draw what they had heard as they had heard it.

See the photo for example: Like many of his fellow pupils, this pupil of about 7 years had focused on drawing the sound elements as objects, such as tree leaves, the cat and a washing machine. However, this pupil also had understood from our previous presentations, that representing movement in the drawing was a further possibility for translating sound. Here this pupil drew dashes and circles in what we can read as beeps from the washing machine turning on, as well as water starting to flow, and the cat food falling into its dish. This pupil was able to merge two different interpretations of sound in one drawing. 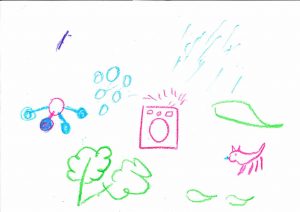